We have looked a different styles of embroidery from around the world this month and today we are featuring a project that has brought together stitchers from across the globe. It is called the Scottish Diaspora project and one of the volunteers, Margaret Ferguson Burns, was kind enough to tell us more about it: 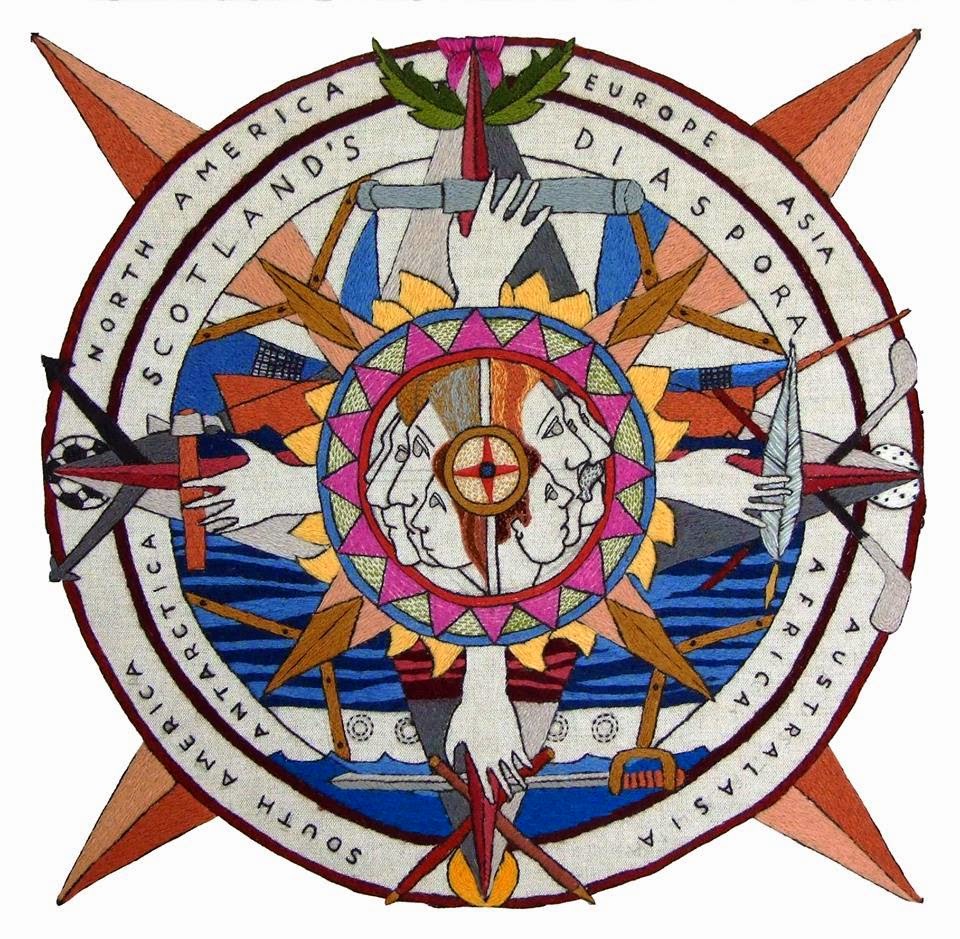 The Scottish Diaspora Tapestry, a series of hand embroidered panels of wool on linen, is a unique project involving communities around the world where Scots have travelled to settle and trade.

The artist is Andrew Crummy who also designed the images for the Prestonpans Tapestry and the Great Scottish Tapestry which is currently touring Scotland and will be at the Scottish Parliament for 3 months over the summer for the Homecoming 2014 and the Edinburgh Festival and Fringe. Plans for a new permanent home for this, in the Scottish Borders, have just been announced.

The co-ordinators are Yvonne Murphy and Gillian Hart who travelled to around half of these countries to meet potential stitchers and develop the project. Countries represented include Australia, New Zealand, Jamaica, Canada, France, U.S.A., Netherlands, England, Northern Ireland, Portugal, Poland, India, Pakistan, Bangladesh and Argentina.

Members of these communities were able to contribute to the design by telling the story from their perspective and Andrew included their ideas in his drawings.
Packs containing the linen, wools, the coloured drawing and instructions were sent out. These included which stitches and colour to use for the outlines and border and some suggested stitches with diagrams to get them started. Stitchers were free to interpret their design by choosing which stitches and combinations of colours and shades to use to best achieve the effect they wanted. 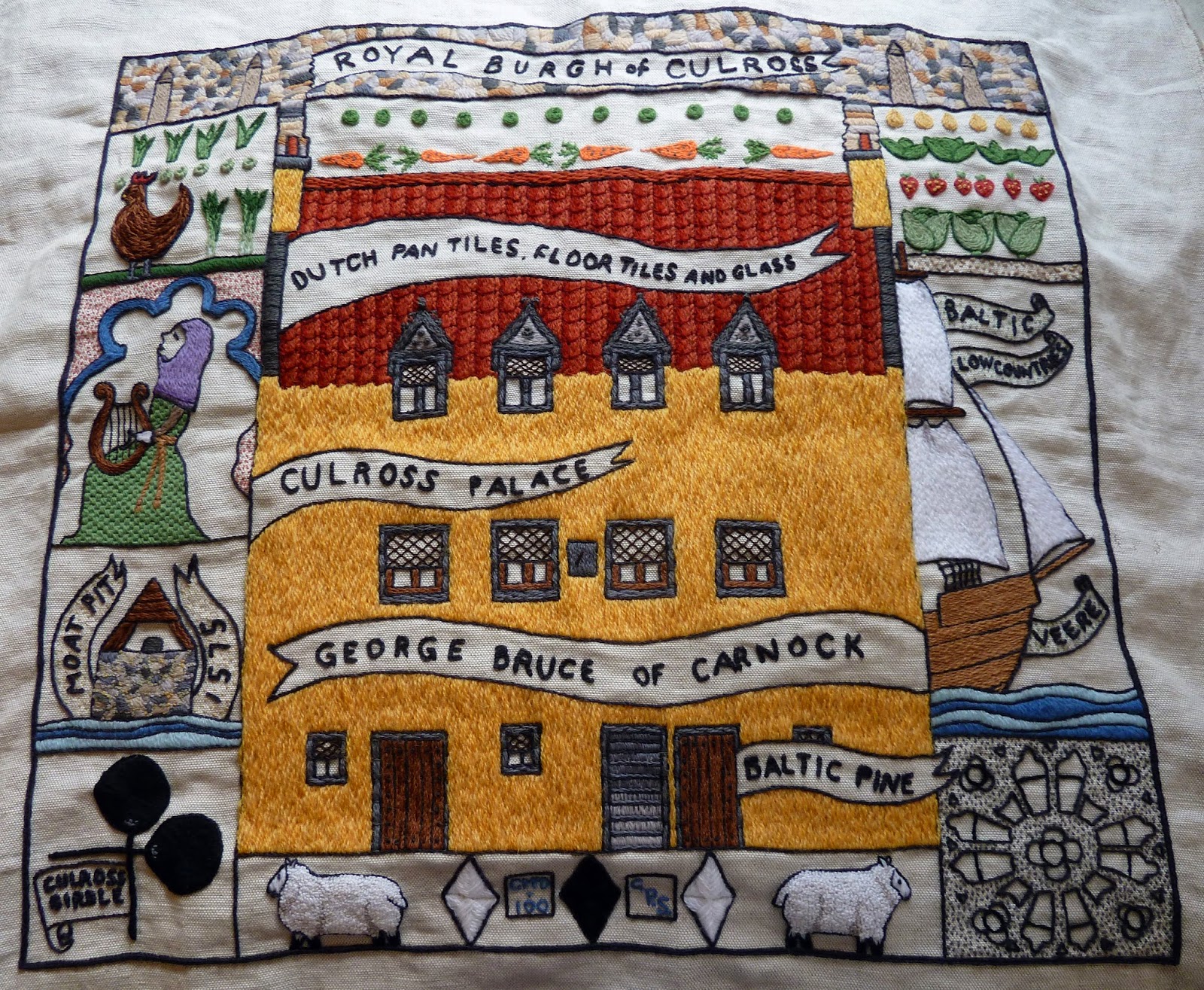 A team of Studio Volunteers has undertaken a variety of tasks to contribute to the project: cutting linen and the calico backing fabric, sorting and labelling wool and transferring the designs onto the linen. We were also asked to stitch 2 of the global panels featuring Highland and Scottish Country Dancing. In the lead up to the launch we have been stretching the panels, machine and hand finishing the backing and attaching identification codes. 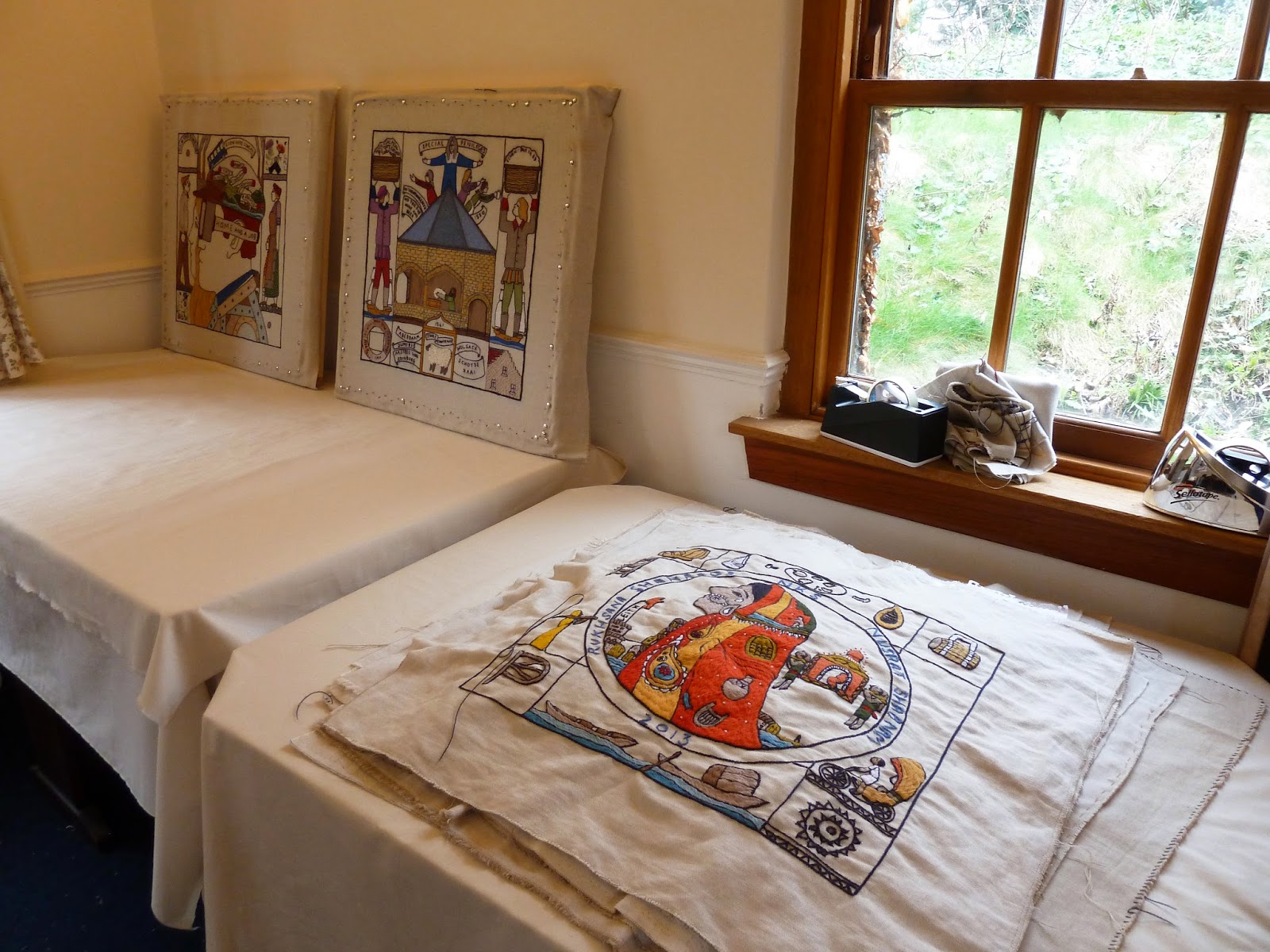 
It is a great pleasure to work in the studio, a good humoured collaborative environment where skills have been re-established, shared and developed in very congenial company. Being surrounded by such beautiful work from across the world has been truly inspiring and has been a wonderful experience for us all. 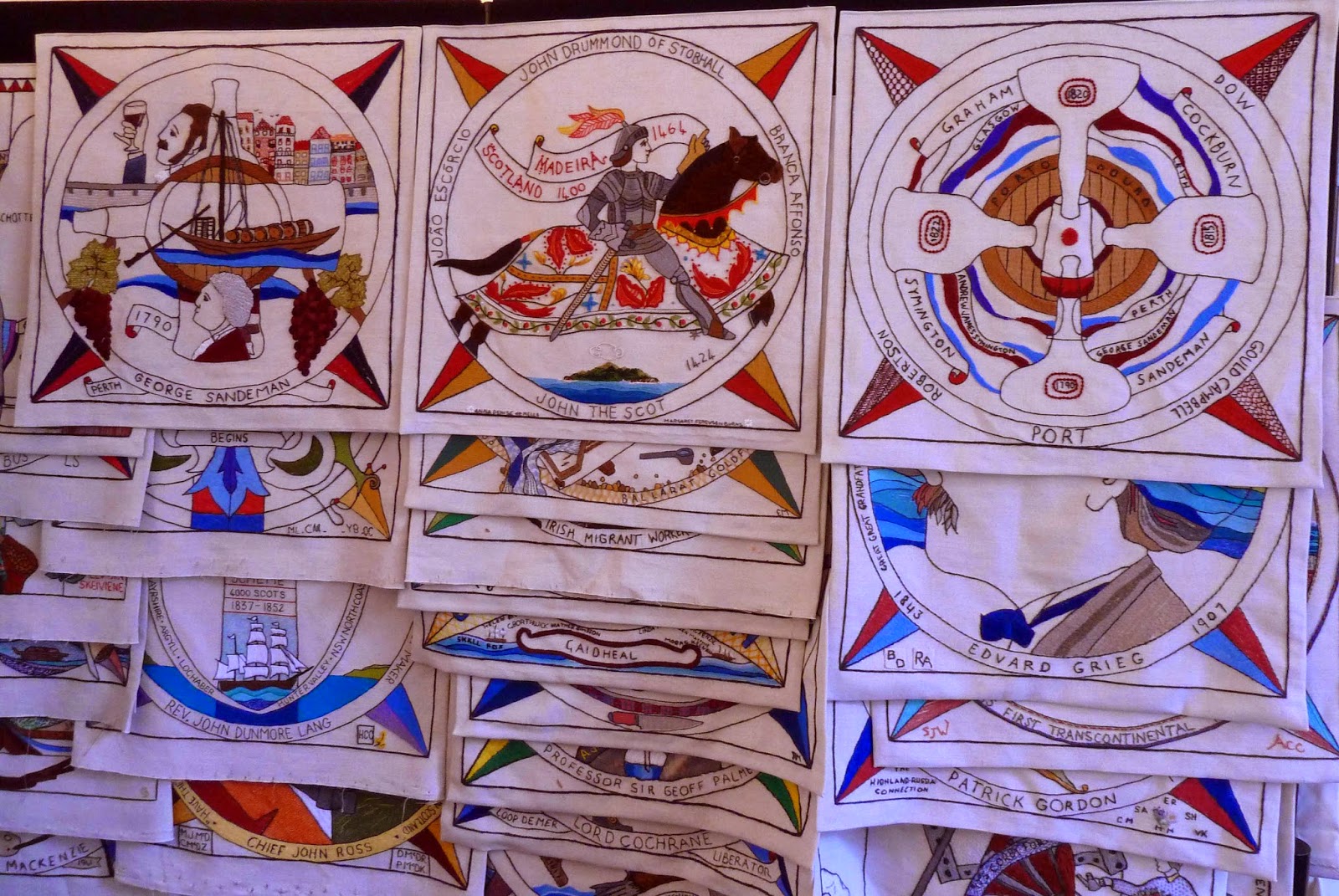 I can tell you more about a terrific opportunity I was given - to stitch a Portuguese panel: the Madeiran one about Joao Escorcio/ Sir John Drummond of Stobhall who was one of the first settlers there in 1424, travelling there on Zarco’s caravel. I was asked if I could try to find stitchers in Portugal itself to embroider other panels. After following various avenues, Floresita of Feeling Stitchy put me in touch with Gabi of Agulha nao Pico and we had 2 groups, one in Porto stitching a panel about George Sandeman and one in Lisbon also about the Port trade.

They embraced the challenge fully and it has been a pleasure to communicate with the women in these groups via their embroidery blog sites and on Facebook. I have enjoyed hearing about the progress of their panels and keeping them up to date with progress once they had been sent back to Scotland. The Porto group invited a descendant of George Sandeman (the 13th or so) to see them working on his family panel. The Lisbon group involved twenty 10 year olds in a history/geography/stitching session and 6 of them were able to make some stitches in their panel. Yesterday all 3 Portuguese panels were complete on the same day and hanging together in a row in the studio. That was great to see.
The returned panels show a huge range of different stitches and techniques and demonstrate the wonderful effects which can be made with such simple materials and tools. The linen/cotton mix fabric is manufactured by Peter Greig and Company, Kirkcaldy and the wool is Appleton's, manufactured in England. The panels for this artwork are 1/2 metre square. 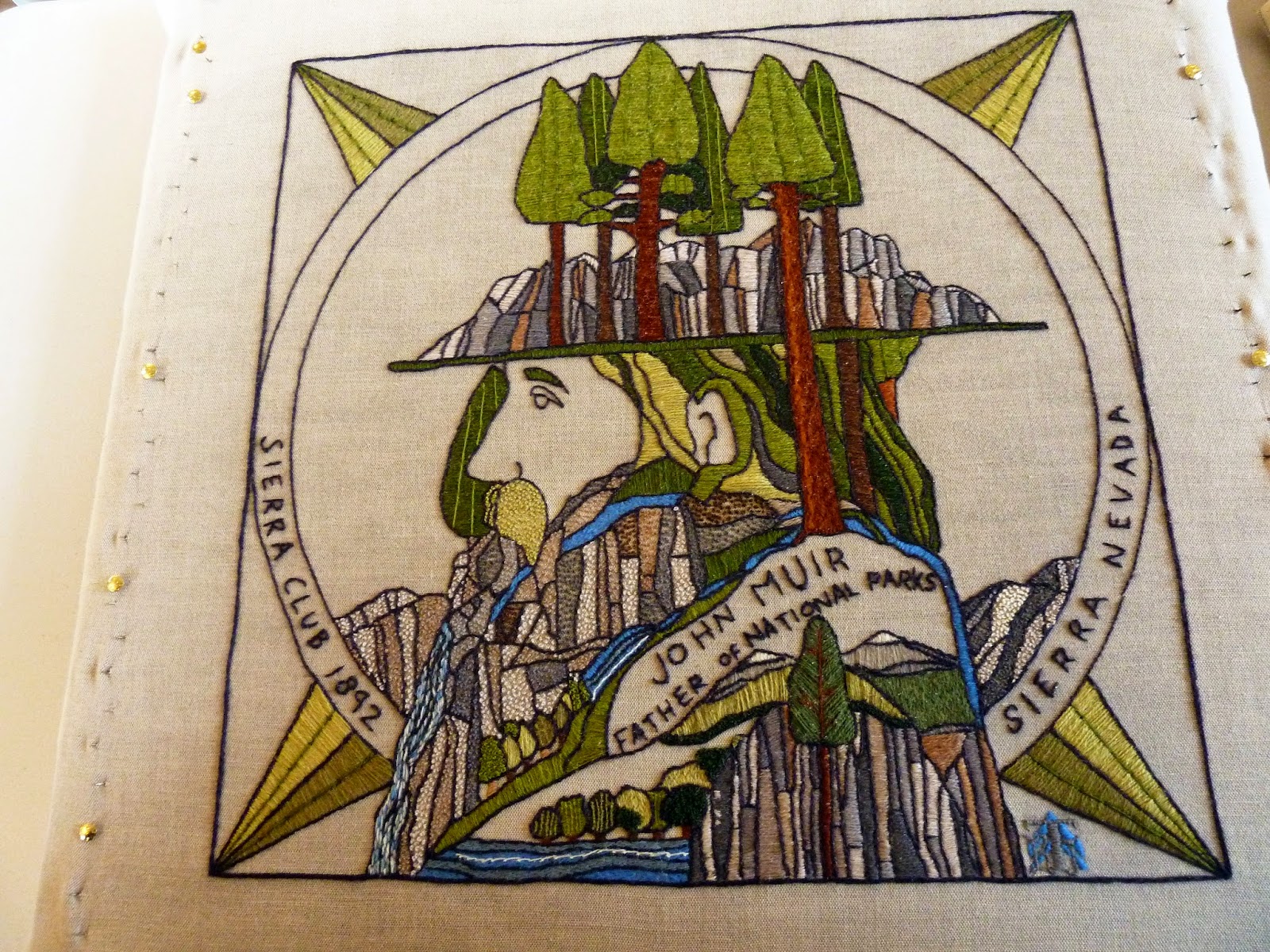 There are currently 164 panels with another 100 or so to follow within the next few months.
The launch of the Scottish Diaspora Tapestry will be on 31st May 2014 at Prestonpans Community Centre, Prestonpans, East Lothian (until 8th June) as part of the 3 Harbours Arts Festival. It will be exhibited at the McRobert Centre, Stirling later in June and at St Mary's Cathedral, Palmerston Place, Edinburgh in August.
Further information can be found on the Scottish Diaspora Tapestry Website and on Facebook.
What are you stitching? Please share in the &Stitches Flickr group. We'd love to see it!
Posted by sewphie at 8:29 PM