Following on from Bo's lovely embroidery last week, which featured simple straight stitches creating a completely unique fill pattern, I was inspired to start a new post category called 'Exploring'. These posts will be all about exploring a stitch or technique and looking at how it can be used - sometimes showcasing works by others done in interesting ways, sometimes as a more informative post or tutorial.

To start things off this week, I want to look at the simple french knot and show you how some very talented embroiderers have used them. French knots seem to intimidate some stitchers - myself included for a long time! - but once you get the hang of them, they can become very addictive. Of course they are often used as delicate accents, but if you have the willpower, they make a very impressive fill.

Rachel from Cornflower Blue Studio has combined a thick background of french knots with crochet and fabric to create such a wonderful contrast of textures. Because of the color thread she used, and the way the knots catch the light, I can't help but feel that they mimic the movement and color you'd see underwater. 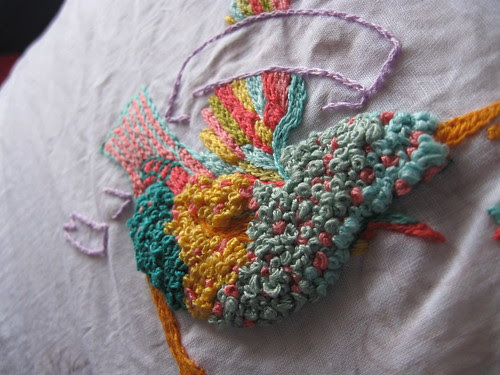 Amanda aka Amanda Panda Pants on Flickr has used french knots as a bright and cheerful fill here, but I especially love the way she has layered them to create extra height for the bird's wing. It's like a bit of french knot stumpwork, using the stitches to make the embroidery 3-dimensional!

Flickr user and blogger Cauchy has filled an incredibly touchable 6-inch space with french knots here, blending what looks to be about 5 shades of thread in a way that makes it feel like there are hundreds of shades in there. I imagine a light breeze gently scattering those colors around. 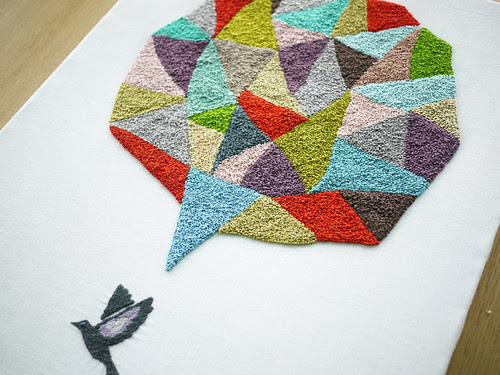 And lastly, Yuko of PataPri has filled a huge space entirely with french knots. I'm not sure if it's sheer enormity of the project - there must be *many* thousands of knots there!, the eye-catching geometric pattern she's stitched them in, or the wonderful contrast of that thick, dense texture next to such a tiny, sweet bird, but it's really wonderful.

These stitchers have really captured my imagination with their use of french knots - I think I already have some ideas a-brewin'!


Julie is a knitter and stitcher, born in the US but now living in the UK. She loves vintage embroidery books and bad slasher movies. With her mum, Julie designs embroidery pattern inspired by literature under the name Little Dorrit & Co.