My friend Teresa mentioned a while ago that she was working on a project using horse hair, so I asked her to share a little bit about it for the No Floss Allowed series. Teresa was a guest blogger last summer with an awesome tutorial on stem stitching. Teresa's work can be found at Daisies for Violet but these days she's much more active on Tumblr or Instagram. Here's what she had to say about embroidering with horse hair. 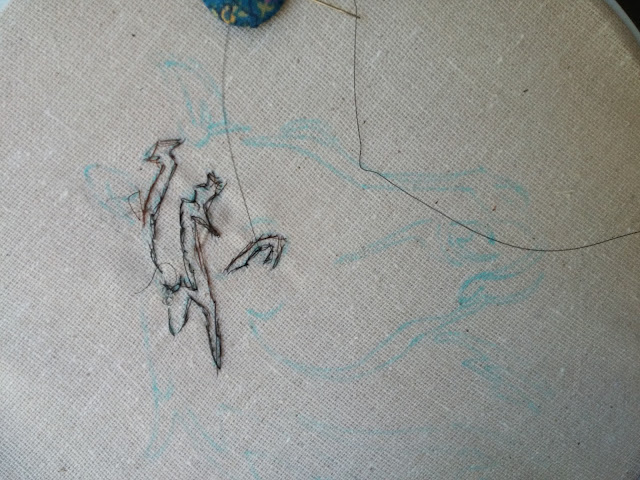 A good friend of mine has a horse that is sick. She asked if if there was anything I could make with some of her horse, Apollo's, hair. Always up for a challenge, of course I was up for it. And challenge has been the operative word.

To begin with, it's hair. There is a thin, lighter end and a thicker, coarser, and darker end. It's more coarse than I realized it would be and it breaks often. You know that tug you do when stitching? to tighten your thread? That doesn't work here, it snaps right off. After an hour or so, it sunk in that this isn't thread and can't be treated as thread, which made things easier.

Because the hair is so thin, about as thin as one DMC strand, I need to stitch the same stitch repeatedly to create a dark line. The stitch I'm using is really the stem stitch, but over and over itself and in varying lengths. 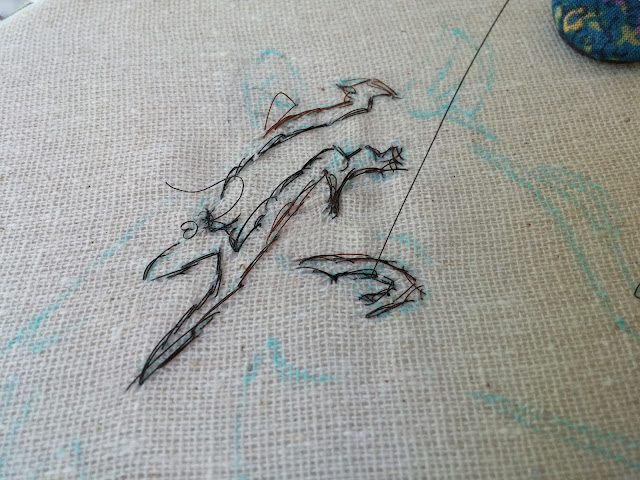 I think that when the piece is done, it will have an interesting sketchy feel to it. I only hope that my friend will feel I've done Apollo justice.

Thank you for sharing this experience with us, Teresa!

What are you stitching? Please share in the &Stitches Flickr group. We'd love to see it!
Posted by Unknown at 12:00 PM