Stitch Together: Organizing a picnic 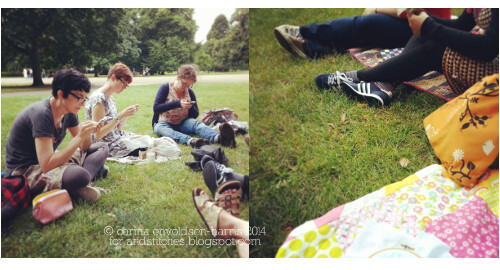 Maybe you remember that we organised a couple of stitchy picnics last year?

The idea for the &Stitches picnics came about because Nicole, Julie and I plus another stitchy friend had spent a lovely afternoon stitching and chatting in the courtyard of the V&A a couple of years ago.

We thought we'd have to do that again, and with more people. The more the merrier!

There was supposed to be 3 picnic dates, but one date we decided to cancel because the weather was against us. On the other two days we spent a lovely afternoon stitching and chatting. Sharing the projects we were wotking on and giving tips about various techniques.

I hope we can do something similar again some time. Although maybe slightly differently. We definitely learnt some lessons from the picnic 'experiment'.

In a public space, like a park, it's actually not as easy as just turning up somewhere with your stitchy project. We suddenly had to consider what kinda of gathering this would be. A lot of parks etc require you to pay a fee if it's an organised event - and especially if it's something that people pay to attend (not in our case).

Since our picnics were pretty informal, we decided that the park people probably wouldn't care about our picnics. We didn't expect 100 people suddenly turning up with their hoops and floss. But it's definitely something to look into if you ever want to organise something 'proper' in a public space. 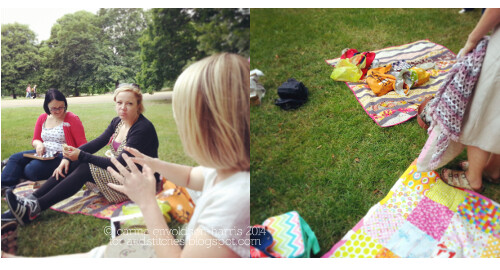 The choice of place was also something to consider. We had the picnics in London, so we wanted to make sure that it was somewhere fairly easy to get to, with good public transport conenction. We ended up chosing a corner of Kensington Gardens, near Kensington Palace.

Another consideration was alternatives nearby in case we were rained out mid-picnic. Among the things we considered were museums and pubs.

Who knew that there would be so many things to figure out just to have a picnic, eh? ;-)

We enjoyed the picnics a lot, but because of the British weather, we probably won't do them again. It's just too unpredictable, unless there's a heatwave!

But we are thinking about other ways we could stitch together. Not just the &Stitches team, but with you. We love seeing what people are stitching and it's so awesome to see it in person and hear about the project.

Have you arranged picnics or other gatherings where could meet and craft together? What have your experiences been? Have you attended a stitchy gathering in person? Would you do it again?

What are you stitching? Please share in the &Stitches Flickr group. We'd love to see it!
Posted by Carina at 3:31 PM

Email ThisBlogThis!Share to TwitterShare to FacebookShare to Pinterest
Labels: andstitches in the park, carina, stitch together