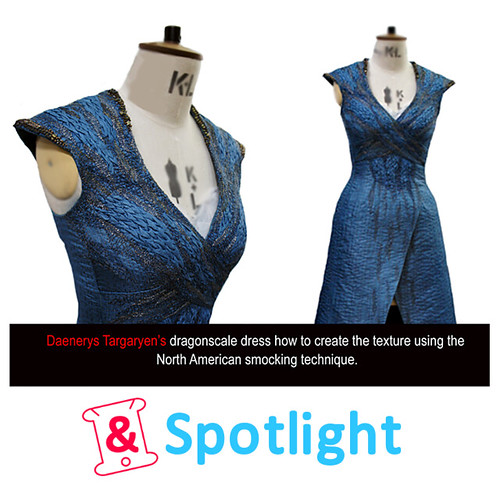 As we count down the hours til the premiere of Game of Thrones Season 5, I’d like to shine the spotlight on the woman behind those exquisitely embroidered costumes: Michele Carragher. Thanks to Michele, we can all don a dragonscale frock like Daenerys Targaryen!

Michele has a super tutorial on her web site showing how to stitch dragonscale, just like she did on Khaleesi's dress. Click here to have a look!

Michele’s website is pure embroidery eye candy, featuring the fantastically detailed costumes as well as a few behind-the-scenes peeks at how she creates her stunning designs.

But what we wanted to know at &Stitches is:

What costume should we watch out for in the new season of Game of Thrones, Michele?
Do you have a favourite?

Michele: "I cannot reveal too much detail about the costumes for season 5 that I have worked on, as I am sworn to secrecy, but I wouldn't be giving out too much of a spoiler to your question as HBO have already released sneak-peek images of the character and a couple of their costumes that I mention.

“For the forthcoming season 5 of Game of Thrones, I enjoyed working on many designs for a variety of characters. The main character that I created embroidery for season 5 was Myrcella, Cersei’s daughter who was sent away to and now lives in Dorne.

“I would say the costumes that I worked on for her would be my personal recommendation to look out for – they have a delicate, seductive, Nymph-like romanticism to them. I really enjoyed working on them, being able to use new materials and techniques within the designs. Once season 5 has aired I will be able to share more detailed images of Myrcella’s costumes and other characters that I created embroidery for in season 5 on my website.”

Thank you very much, Michele, we look forward to seeing your beautiful work on the show!


What are you stitching? Please share in the &Stitches Flickr group. We'd love to see it!
Posted by Unknown at 1:00 PM